I spend hours and hours in my inbox every single day. When I was CEO of OpenDNS, I would triage constantly to not block some critical path for my team. In particular I dreaded the “death spiral” of threads that led to confusion and escalations among teams if I didn’t reply fast enough. When I led the Security Business at Cisco, I would joke that I was a human email router. And as a general partner at a16z, where we also have firm-level “SLAs” for email response times, my inbox is like the final level of Tetris.

Email takes way too much time. Sometimes I just want to deal with an email later, or never; or I want to see it if the sender hasn’t followed up with me. It’s also very hard to know what’s important outside the model of reverse chronology — we’re programmed, almost like Pavlovian dogs, to instantly respond to every little notification bell of what came in last. I also resented the intrusion other people’s priorities had into my workflow, and wanted email to be on my time, my terms — without me having to work so hard for it to run my to do list, my business, my life. Worse still, email always seemed like an infinite scroll to nowhere.

Email is a neverending, unrelenting, and often joyless experience. Over the past years — and I mean years — I tried every single new email app, hoping I would triage faster and become more responsive. But nothing stuck — or, they were just hacks and tricks to productivity instead of a solution to an entirely better way to work, a new way to be.

You’ve probably heard of Superhuman, the new email client started by Rahul Vohra (CEO), Conrad Irwin (CTO), and Vivek Sodera. Superhuman is the fastest email experience ever made. It’s what Gmail would be if it were built today, not 15 years ago. It’s the kind of innovation that can only happen in startups, and with special, once-in-a-lifetime founders.

But first, why do we care so damn much about email? Because it doesn’t have to be like a utility we put up with. It can be something better and more joyful to use. After all, email is the portal to our lives at home and in the workplace; it’s not just where we interact with people, it’s where we often make and memorialize decisions, too.

Email is an online representation of what we’ve done, who we are, and what we’re going to do. It was originally intended as a way for users to communicate between machines, and then between organizations — yet it’s joyless, despite the presence of emojis and other frills and features since. And though email is everywhere in the developed world, and remains the de facto system of record and center of activity for all enterprises big and small, it has seen very little innovation. Despite (or maybe even because of!) the entry of players like Google with public Gmail in the early 2000s, email remains a hot mess. It takes way too much time to view, react, respond, and manage. For many people, doing email seems to be their main job… but should it be?

We may not know exactly what the future of work looks like, but I do know that email will be at the front and center of it. Which is why we’re now, finally, seeing a much better way.

The prosumerization of the enterprise

Every few decades or so, there’s a “refresh” in how people work through a new generation of tools — whether it was Microsoft Excel and Adobe creative suite in the 1990s, or the entry of Google Docs in the early 2000s. Every one of these suites brought a new way of working with it, from the ability to code spreadsheets to the ability to collaborate around documents. Much like with the web and social networks, we embraced these as the solutions that were finally, finally here.

Only, they were the very beginning. As we enter a new phase of computing — where we can go beyond worrying about the plumbing and mechanics of new technology and focus on experience — we now see the superpowers that only elite users and developers and massive enterprises once had now become available to companies of all size, and to individuals, too.

To put it another way, catering to the lowest common denominator was fine for a while, but going forward, software — while still needing to be approachable and accessible — will enable the highest common multiple. Whether it’s tools for designing products and websites all within the browser or for editing video and podcasts as if editing docs to other new tools for collaborating, it’s all just the beginning of a fresh new phase. This phase will cater to a workforce that is increasingly composed of digital natives, and that represents the future of work.

As an industry, we first witnessed the consumerization of the enterprise. As consumer software became increasingly polished and delightful, we then came to expect the same of our business software. We are now at the start of a new wave: the prosumerization of the enterprise. It does not matter whether I was CEO, corporate executive, or general partner — my needs as a prosumer have been ignored for years. And yet there are tens of millions of power users just like me. Now, a new category of prosumer tools can give these users superpowers.

When viewed through the prosumer lens, email alone is a multi-billion dollar category. And given how central email is to productivity (and much more!), Superhuman is incredibly well positioned to expand to adjacent categories.

But that’s not all. People experience joy when using Superhuman. Instead of feeling frustrated by email, they feel happier and even more relaxed. But one of the best things I’ve seen is Superhuman described less as an email productivity tool and more as a wellness product: 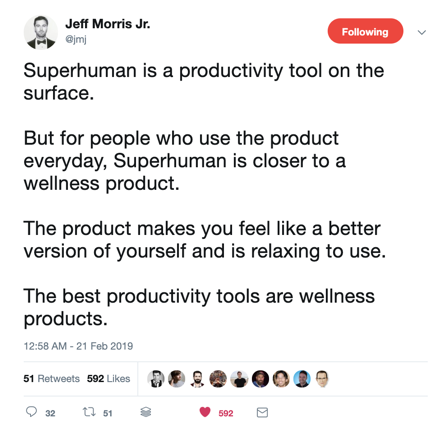 Today, Superhuman costs $30 per month. But being twice as productive is worth much, much more to me than that. I can imagine almost every manager feeling the same about themselves and their teams, and every company too.

Once I started using Superhuman, the idea of using anything else melted away. You don’t realize how slow Gmail is until you use an experience focused on speed. Since the product is meticulously crafted so everything happens in 100ms or less, everything from search to triage and response is blazingly fast. Every element of Superhuman helps you move faster, stay in flow, and experience joy.

And that’s why I am excited to announce that Andreessen Horowitz is leading the Series B financing in Superhuman.

The founders have spent nearly a decade in the “idea maze” of email. First described by Stanford professor and former a16z general partner Balaji Srinivasan, and then popularized by my fellow general partner Chris Dixon, the “idea maze” is what enables certain founders to succeed with their startups over others. Rahul has traveled the email idea maze for nearly a decade: He previously founded Rapportive, a much-loved product that added social profiles to Gmail; it became the first Gmail plugin to scale to millions of users, kickstarted a whole ecosystem of email enhancements, and was ultimately acquired by LinkedIn.

But not only does Rahul have uncanny product sense, he innovates on the art of startups itself. Instead of accepting commonly available convention in and beyond the Valley around product-market fit, he found a new way — a new engine — for iterating to product-market fit. The engine gives you a metric to measure product-market fit and a methodology to systematically increase product-market fit. Similarly, instead of accepting convention around self-service, he pioneered a novel go-to-market with live concierge onboardings that creates power users, increases retention, drives virality, and fosters real human connection. We’re already hearing about startups that say they are “doing Superhuman onboardings” or say that they’re using “the Superhuman strategy”! I believe that we will continue to see many other founders and startups imitate these approaches, which is innovation just as it should be. But Rahul is the kind of deep, first principles thinker who frequently arrives at such novel conclusions — including his focus on keyboard shortcuts and educating users about new models of interaction. He is the kind of founder that leads others to follow.

Rahul and his team are just getting started. So I’m thrilled to be on this journey, to join the board, and to bring the full support of our firm to Superhuman. Here’s to building the best tools in the world, and to bringing joy to the way we work, live, and play!